In the early days of the University, while Mr. Jefferson was still Rector, a voluntary 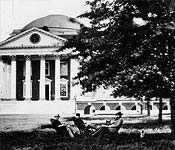 military company existed on Grounds.  Students filled the ranks, established their own chain of command, and conducted drills.  In 1825, Mr. Jefferson made tactical drill and training mandatory.  Such training, he hoped, would produce qualified officers for a national militia.  He even foresaw military education developing into a recognized academic field of study.  Within a decade, there arose a dispute over the issue of weapon keeping between the cadets and the faculty.  The cadets wished to keep arms in their Lawn rooms on the Academical Village.  Faculty members refused this request, demanding that weapons be kept in a separate armory.  Without a compromise, the company fell idle for some 25 years.

Upon the secession of South Carolina on December 20, 1860, two military companies were again formed at the University, this during the second session of 1860-1861.  Students from the Virginia Military Institute traveled to Charlottesville to form and train the companies.  On the night of Virginia secession, April 17, 1861, the companies traveled with the Monticello Guard and Albemarle Rifles to Harper’s Ferry, WV.  Lt. Roger Jones, USA, received reports of the guards and cadets’ movement.  He burnt the armory there and retreated.

With northing else to do, the cadets returned to Charlottesville.  Shortly thereafter, General Robert E. Lee declined to receive the UVA Cadets into service for the Confederacy, and they thus disbanded.  On February 26, 1861, seven members of the companies erected a confederate flag on Dawson’s Row, which is located just outside of the current AROTC offices.  The flag was moved to Thomas Jefferson’s Rotunda, the centerpiece of the University, and attached it to the lightening rod in support for the Commonwealth and the South.

In 1865, Charlottesville Mayor Christopher H. Fowler, elected just three days earlier, and the chair of the University faculty, Socrates Maupin, chose to surrender the University to George Armstrong Custer’s advancing cavalry rather than risk its destruction, a fate that the Virginia Military Institute had suffered some months earlier.

After the Civil War, with 42 different state and private institutions, most units lost their focus on training leaders, developed their own curriculum and were judged solely on parade ground results.  The death of officer training before the First World War inspired the Chief of Staff, General Leonard Wood to formalize the Reserve Officers’ Training Corps in the National Defense Act of 1916.

The current Army ROTC detachment was established at the University of Virginia on April 5, 1948 and at the request of University President Colgate W. Darden, Jr. participation this time was voluntary.  In addition to the approving of the first Distinguished Military Graduates, the build up of Cold War tensions caused Congress to pass the Selective Service Act in 1948.  The University of Virginia again answered the call to service in the finest citizen-soldier traditions.

Many of the first UVA cadets were veterans of World War II.  The detachment was originally affiliated with the Transportation Corps, and the cadets attended summer camp at the Army Transportation Center at Ft. Eustis, Virginia.  There they trained on several types of equipment, including trucks, ships, and locomotives.

Later, our detachment was affiliated for a brief time with the Medical Service Corps and the Signal Corps.  During the 1950’s there were over 500 members of the Army ROTC battalion at UVA.

In 1964 ROTC was producing almost 12,000 lieutenants annually.  The monthyl cadet subsitence allowance was $27.  In 1965, following the ROTC Vitalization Act the Cavalier Battalion was designated a General Military Subjects ROTC Unit, reducing contact hours for Advance Course Cadets from 300 to 210 and bestowing the title of Professor of Military Science on the department head.

In 2012, 2015, and 2018, UVA Army ROTC was one of the MacArthur Award Winners. The award recognizes the eight schools, selected from among the 275 senior Army Reserve Officers' Training Corps (ROTC) units nationwide, as the top programs in the country. The award is based on a combination of the achievement of the school's commissioning mission, its cadets' performance and standing on the command's National Order of Merit List and its cadet retention rate.

Fallen Alumni of the Cavalier Battalion

Many of the first UVa cadets were veterans of World War II.  Later, they served as officers in the Korean War, Vietnam, the Cold War and the current conflicts in Iraq and Afghanistan.  In recognition of their valor, several awards and classrooms have been designated for UVa Army ROTC alumni.

Michael F. Scott, the first Cavalier Battalion graduate killed in Vietnam, is remembered through an annual award which bears his name.  Scott was a 1965 graduate of the University, who was killed in action on 09 February 1967.  The award is presented to the Army ROTC graduate who best exemplifies the soldierly qualities of loyalty, dedication, and honesty, and who exhibits outstanding leadership qualities.  The award consists of an engraved replica U.S. Army .45 caliber pistol.

The Thomas Jefferson Rainey II Memorial Award is presented to the fourth year Army ROTC cadet, selected by a board of officers, whose conduct exemplifies the spirit, ideals and traditions of the University of Virginia.  This award is given in memory of Tom Rainey who as a student at the University was a member of Army ROTC, the varsity football and lacrosse teams, Delta Kappa Epsilon Fraternity, the Judiciary Committee, Corks & Curls Staff, Inter-Fraternity Council, Eli Banana and the IMP Society.  Commissioned as an Infantry Officer in 1968, Lieutenant Rainey volunteered for Airborne training and the Army Special Forces.  While serving in South Vietnam on a Special Force “A” Team, he was decorated for valor by both the US and the Republic of Vietnam.  Afterwards, he served 10 years in an Army Reserve Special Forces Unit.  The award consists of a Jefferson Bust and a certificate.

The 1LT Norman T.S. Flecker Memorial Award is presented to the third or fourth year Army ROTC cadet, who has provided leadership and inspiration to others through his or her unmatched selflessness, work ethic and integrity.  The award honors the memory of Norman T.S. Flecker who died in a helicopter crash in the Republic of Korea on June 30, 1998.  LT Flecker was a 1996 graduate of the University.  The award consists of an encased American Flag and a check for $1,000.

Captain Humayun S. M. Khan, 27, of Bristow, Virginia, died June 8, 2004, in Baquabah, Iraq, after a vehicle packed with an improvised explosive device drove into the gate of his compound while he was inspecting soldiers on guard duty.  CPT Khan was the first UVa alumni killed in Operation Iraqi Freedom.  The CPT Humayun S.M. Khan Memorial Award is given to the fourth year cadet who best exemplifies the Soldierly qualities of courage, dedication, and selfless service, and who exhibits outstanding leadership qualities.

1LT RJ Hess was a graduate of the University of Virginia Army ROTC program and was respected as a genuine leader by his peers. On April 23rd, 2013, 1LT RJ Hess was killed in the service of his country in Pul-E-Alam, Afghanistan. In memory of 1LT Hess, UVa Army ROTC established the 1LT Hess Leadership Award and Scholarship, which will be presented annually to a Fourth Year Cadet who embodies the attributes of moral courage, integrity, and selfless service