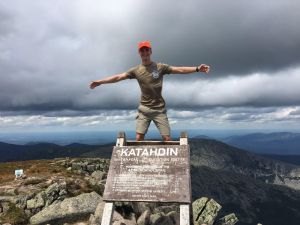 Cadet Arendt is a 4th year foreign affairs major from Plymouth, MA. He has spent a month in Senegal through the Army’s CULP program and attended Air Assault School at Ft Benning. Cadet Arendt hikes and works out in his free time.

Cadet Arendt will commission as an Active Duty Military Intelligence (branch detail Infantry) Officer in May 2021. 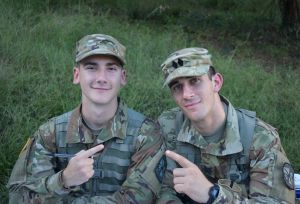 Cadet Benoit is from Stafford, Virginia and studies Economics. He has had many opportunities through Army ROTC to become more global. After his first year, Project GO sent him to Indonesia to stay with a host family and learn the language and culture. He was also given the chance to work with members of the German military to try for the German Armed Forces Proficiency Badge.

Cadet Benoit will commission as a Medical Services Officer in the Reserves in May 2021.

“I joined ROTC for opportunities like these that allow me to be a better global citizen.” 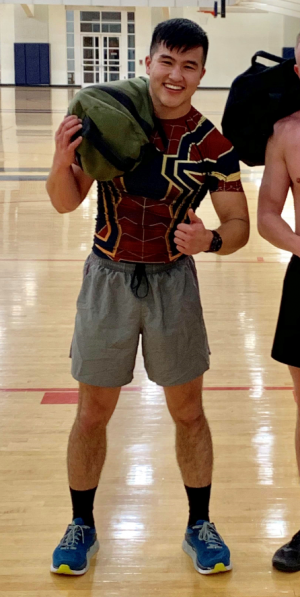 Cadet Jake Dexter is from Arlington, VA, and he is majoring in Kinesiology. He has participated on the Ranger Challenge team all three years, leading the team as captain his third year, he has participated in and led Mosby's, and he has participated in Color Guard. Outside of ROTC he is a small group bible study leader for Chi Alpha Christian Fellowship and a ULINK Peer Academic Advisor. He also enjoys wrestling, playing video games with his friends, and playing foosball.

He comes from a military family as his father has served in the Army for 30 years.

Cadet Dexter has been awarded the Parachutist Badge.

Cadet Dexter will commission as an Active Duty Medical Services Officer in May 2021.  He hopes to attend the Army Physical Therapy School upon graduation and serve as an Army physical therapist.

"Service has always been important to me and my life has been made better by the service of others, so I knew I wanted to give back and pay it forward to my country." 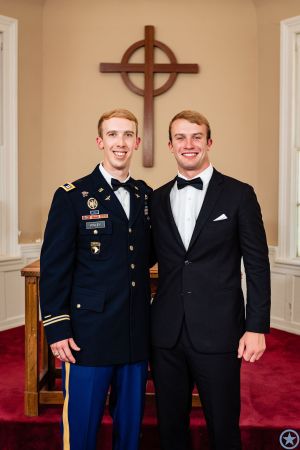 Cadet Finley is from Raleigh, NC, and graduated from Wakefield High School. He is majoring in Biomedical Engineering with a minor in Economics. In his time at UVA, he has been involved in various organizations and leadership roles such as Camp Kesem, Madison House, and Phi Gamma Delta Fraternity. He enjoys sports, reading, and spending time with friends and family.

Cadet Finley will commission as a Finance Officer in the Reserves in May 2021.

“I have always been interested in the military and wanted to serve like my family. I think the Army provides the best opportunities for someone with my skill set and interests.” 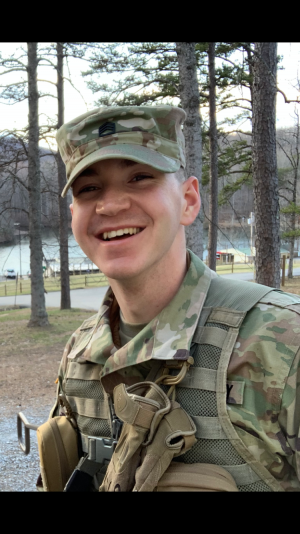 Cadet Gotimer is from Leesburg, Virginia and is majoring in Foreign Affairs. After transferring to the University of Virginia from Old Dominion University in his third year, Cadet Gotimer joined the Ranger Challenge team and UVA’s Club Rowing Team in Fall 2020.  He has spent countless hours studying foreign languages and cultures, like Arabic and Russian. In his free time, Cadet Gotimer enjoys running, playing board games, and spending quality time with his five brothers.

Cadet Gotimer will commission as an Active Duty Military Police Officer in May 2021.

Cadet Heninger is from Vienna, Virginia. He is majoring in both Biology and Chinese. Cadet Heninger has acted as a Mosby's Sergeant and the Color Guard Captain in the ROTC program. Outside of ROTC, he has been an RA, both worked and played in the intramural program, and worshiped with the Chi Alpha Christian community.  When not occupied with business, he likes to read. He is currently reading Les Miserables by Victor Hugo.

Cadet Heninger will commission as an Active Duty Adjutant General Officer in May 2021.

Cadet Kenkel is from Stafford Va and is majoring in Systems Engineering.

Within ROTC she is an active member of the color guard, the Vice President of the Cadet Association, and was a leader of Mosby's Rangers. During the summer between her 2nd and 3rd years she completed a cadet internship with the National Reconnaissance Office (NRO). Outside of Army ROTC she works at the Slaughter Recreation Center, is an active member of the service organization One Thousand Schools, through which she has gone on three service trips to Honduras, and was a volunteer coach to a 3rd grade basketball team.

"I believe the leadership experience I have gained from ROTC, and the leadership skills I will develop in the Army will aid in my goal to become a successful Systems Engineer.

Cadet McClorey, a native of Vienna, VA, is majoring in Structural and Materials Engineering with a minor in Materials Science Engineering.  In summer 2019, Cadet McClorey interned with USAFRICOM’s Civil Affairs Division in Stuttgart, Germany conducting analytical military intelligence work.  Interning with the Department of Defense and UVA this past summer, he worked on designing reinforced concrete ballistic walls.  Prior to UVA, he excelled as a national competitive swimmer.  He continues to maintain fitness through swimming and weight-training in Army ROTC.  Cadet McClorey has been involved in choral arts as a chorister in UVA’s University Singers, Chamber Singers, and the Virginia Men’s Glee Club.  Within the Cavalier Battalion, Cadet McClorey enjoys coordinating Army ROTC’s small choral ensemble for special events throughout the year.  In his free time, Cadet McClorey’s hobbies include classical piano and studio art.  He enjoys long walks with his parents and late night discussions with close friends.

Cadet McClorey will commission as an Active Duty Cyber Officer in May 2021.

“I joined Army ROTC to serve my country.  With this training as a start, I intend to make a positive and real impact in the Army and in the world.  In the words of John Henry Newman, ‘…yet who can say the heights to which in time men can proceed in all things, who beginning by little and little, yet in the distance shadow forth great things?’” 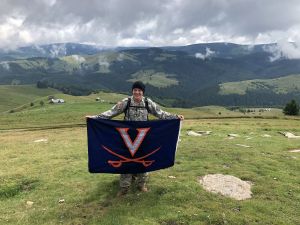 Cadet McDonald was born in Bamberg, Germany and moved to the United States in 2006. He moved to Charlottesville, Virginia in 2007 and has lived here since. He is studying Civil and Environmental Engineering with a focus in Environmental and Water Resources Engineering. Within ROTC he has been involved with Ranger Challenge and Color Guard. Outside of ROTC, he has played on multiple intramural teams.

Cadet McDonald will commission as an Active Duty Engineer Officer in May 2021.

“I joined Army ROTC because I had the desire to serve since I moved to the United States.” 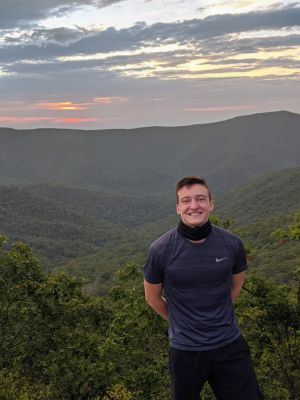 Cadet McHale is from Springfield, VA. He is majoring in Foreign Affairs and Russian. He has been a member of the Cavalier Marching Band for three years and served as the Vice President of the Jefferson Society in the Spring of 2020. Outside of class and ROTC, he enjoys spending time with his roommates.

Cadet McHale will commission as an Active Duty Transportation Officer in May 2021.

"I am extremely proud of the time I have spent with the Cavalier Battalion at UVA." 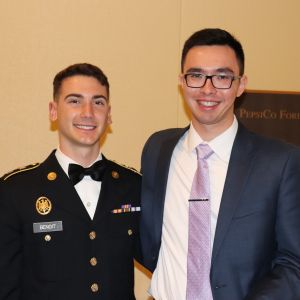 Cadet Murphy is from Virginia Beach, Virginia and is majoring in Computer Science. He is the current S6 for the Battalion.  He had the pleasure this past summer of completing a software engineering internship with Fidelity Investments, and this summer, he will be starting at Palantir Technologies as a Forward Deployed Software Engineer. Cadet Murphy enjoys coding, cooking, and playing video games in his free time.

Cadet Murphy will commission as a Finance Officer in the Reserves in May 2021. 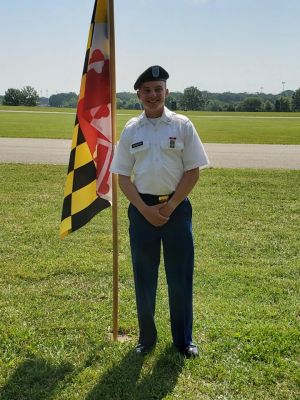 Cadet Pounsberry is from Palmyra, and is studying Politics, concentrating in the U.S. Government. In ROTC, he has been a Squad and Team Leader and enjoys the sense of community there is among the Cadets. Outside of ROTC he enjoys watching and playing sports, playing video games and spending time with his family.

Cadet Pounsberry will commission as an Active Duty Quartermaster Officer in May 2021.

"I joined ROTC because no one in my family has ever served in the military and I want to be an example for my younger brothers and sister." 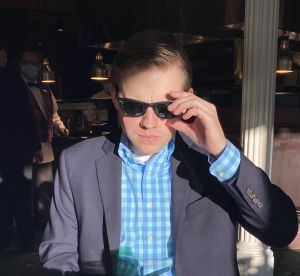 Cadet Reed will commission as an Active Duty Infantry Officer in May 2021.

"The soldier is the Army. No army is better than its soldiers. The Soldier is also a citizen. In fact, the highest obligation and privilege of citizenship is that of bearing arms for one’s country" - GEN George S. Patton 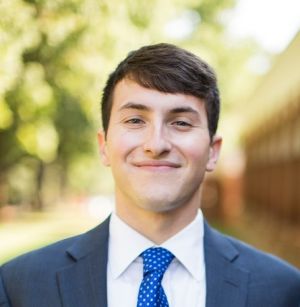 Cadet Shapero was born and raised in the beautiful town of Great Falls, VA.  At UVA, Cadet Shapero is studying economics, with a particular focus on econometrics and empirical industrial organization. He's building on his research background by pursuing a Master of Public Policy at the Frank Batten School.  Outside of class, Cadet Shapero has been a research assistant, a TA for the economics department, and a sketch comic. He's at his happiest when he's eating, making people laugh, and spending time with loved ones.

Cadet Shapero will commission as an Active Duty Air Defense Artillery Officer in May 2021. 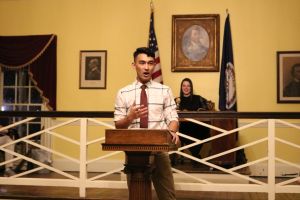 Cadet Shrestha is a Global Studies major hailing from Fairfax, Northern Virginia. A big proponent of the APFT, he enjoys running the 2 mile and hopes that cardio will remain a big part of the Army's physical fitness evaluations. During weekends, he can be found practicing Brazillian Jiu Jitsu, participating in his philosophy discussion group, or writing about current affairs.

Cadet Shrestha will commission as an Active Duty Military Intelligence (branch detail Infantry) Officer in May 2021. 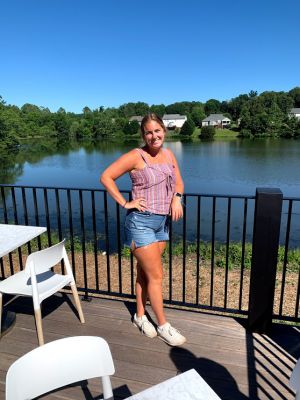 Cadet Sterling is from Manassas, VA and she is in the Nursing School at UVA. She has been a Nursing Class Council representative for the Class of 2021.

Cadet Sterling will commission as an Active Duty Nurse Corps Officer in May 2021.

"My dad was an Officer in the Army. He has always been my biggest supporter and greatest role model so it only seemed natural to follow in his footsteps and become an officer as well." 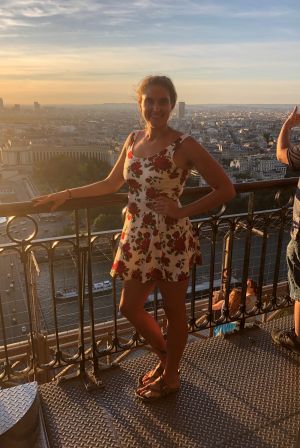 “I hope to support those who give their life to our country and to help soldiers and their families who struggle with mental health conditions beat the stigmas attached to them.” 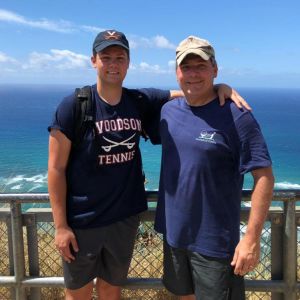 Cadet Warren comes from a military family. His father retired after 26 years in the Army JAG Corps. He also has two brother-in-laws currently on active duty.